Shopping Cart
Your Cart is Empty
Quantity:
Subtotal
Taxes
Shipping
Total
There was an error with PayPalClick here to try again

Thank you for your business!You should be receiving an order confirmation from Paypal shortly.Exit Shopping Cart

Acarine. Note the left trachea is dicoloured due to mites.

Chalk Brood on the floor of the hive or on the ground.

Chalk brood in the comb

Note the lack of wings and also the 2 varroa mites. 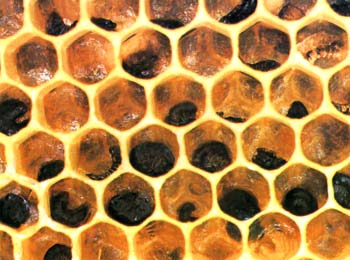 Caused by Acarapis woodi Ren­nie, a spider- like mite. These mites were discovered by Dr Rennie who was funded by the philanthropist Mr. Wood hence the name. There are no external signs of the disease on the bee and the disease has no effect on the bees flying ability but it does shorten it's life. The outward signs are large numbers of bees clinging, crawling and fluttering on plants outside the hive. Diagnosis can only be confirmed by dissection and a microscopic examination of the first thoratic trachea. When the disease is present the trachea changes from its normal creamy colour by the presence of the mites in the trachea. Acarine is less prevelant since the use of Thyme based products for killing varroa.

Two Nosema species have been identified in honey bees in England and Wales, Nosema apis and more recently the Asian species Nosema ceranae. Both are highly specialised parasitic Microsporidian fungal pathogens. Nosema spp. invade the digestive cells lining the mid-gut of the bee, there they multiply rapidly and within a few days the cells are packed with spores, the resting stage of the parasite. When the host cell ruptures, it sheds the spores into the gut where they accumulate in masses, to be later excreted by the bees. If spores from the excreta are picked up and swallowed by another bee, they can germinate and once more become active, starting another round of infection and multiplication.

There are no outward symptoms of the disease. Dysentery is often seen in association with N. apis infections; this may be seen as 'spotting' at the hive entrance or across the frames. The dysentery is not caused by the pathogen, but as a consequence of infection and can be exacerbated during periods of prolonged confinement during inclement weather, especially during the spring. This can lead to the bees being forced to defecate in the hive, therefore contaminating it further.

Nosema is readily spread through the use of contaminated combs. The spores can remain viable for up to a year, it is therefore important not to transfer contaminated combs between colonies and as always to practice good husbandry and apiary management, maintaining vigorous, healthy stocks, which are better able to withstand infestations.

In the UK there are two species of moth which routinely lay their eggs in bee hives and cause damage; the Greater Wax Moth - Galleria mellonella and the Lesser Wax Moth Achroia grisella. Both species can be significant pest of both hives and of stored frames, however, the greater wax moth is usually more of a problem.

Chalkbrood will probably be seen in most colonies at some time but at varying degrees of severity. It is caused by the fungal pathogen Ascosphaera apis.

Spores of the fungus enter the developing larva through the cuticle or orally with contaminated food. These spores germinate and the hyphae of the fungus invade the cells, killing the larva (usually after it has been capped over). Initially the dead larvae will be covered with a white cotton wool-like growth and may swell to fill the cell taking on its shape. After a time these will dry out and shrink to give the characteristic ‘mummies’ that are chalk-like at first turning to a greyish black colour as the fungal fruiting bodies develop. Worker bees uncap the cells of dead larvae so the mummies will be clearly visible; they will also be removed by the workers and may be seen in high numbers on the floorboard or at the entrance to the hive. In very heavily infected colonies, the workers will not be able to uncap all of the affected cells and if a comb is shaken the mummies may be heard rattling in the cells.

Each Chalkbrood mummy produces millions of spores that will adhere to cells and adult bees. It is these spores that are the infective stage of the fungus and may remain viable for up to 15 years. The spores can be spread from hive to hive by drifting bees, or by the beekeeper on equipment and frames moved between colonies.

A good, strong healthy colony will usually be able to tolerate chalkbrood and it is not usually a serious disease. However, in smaller colonies or those under stress (for example suffering heavy varroa infestations) chalkbrood can be a problem. The best method for keeping chalkbrood to a minimum is the maintenance good strong stocks of bees, although in particularly bad cases the problem may be solved by re-queening with a young and vigorous queen from a chalkbrood-free colony. Choice of apiary site is also important and you should avoid damp sites.

Dysentery is often seen in association with N. apis infections; this may be seen as 'spotting' at the hive entrance or across the frames. The dysentery is not caused by the pathogen, but as a consequence of infection and can be exacerbated during periods of prolonged confinement during inclement weather, especially during the spring. This can lead to the bees being forced to defecate in the hive, therefore contaminating it further.

Deformed wing virus (DWV) is one of the viral diseases associated with Varroa mite infestations. Although the disease is also found in colonies not infected with Varroa, it appears to be both more common and more destructive in colonies where mites are well established.

Other things can cause an occasional case of deformed wings and a diagnosis is impossible without laboratory tests. However, if you see a young bee with distorted, misshapen, twisted, or wrinkled wings, there is a good chance you are seeing the results of deformed wing virus.

Bees with deformed wings do not live very long. They are usually thrown out of the hive by the housekeeper bees and can be seen walking away from the hive in the grass.

Chilled brood is not actually a disease but can be a result of mistreatment of the bees by the beekeeper. It also can be caused by a pesticide hit that primarily kills off the adult population, or by a sudden drop in temperature during rapid spring buildup. The brood must be kept warm at all times; nurse bees will cluster over the brood to keep it at the right temperature. When a beekeeper opens the hive (to inspect, remove honey, check the queen, or just to look) and prevents the nurse bees from clustering on the frame for too long, the brood can become chilled, deforming or even killing some of the bees.

To minimize the risk of chilled brood, open the hive on warm days and at the hottest part of the day (this is also the time when the most field bees will be out foraging and the number of bees in the hive will be at its lowest). Learn to inspect your hive as quickly as possible and put frames with brood back where the bees can cluster on it immediately.

This is a virus disease. Larvae infected with sac brood die in their sealed cells. They become light yellow in colour, with tough skins. The skin darkens and the outer layer becomes loose, forming a "sac" which encloses a watery fluid. The brood lies stretched out lengthwise in the sealed cell. After the death of the insect, the cell is partly or fully opened, and the worker bees remove it from the hive.

The virus is spread in the nest by the house bees evacuating the dead brood. The virus does not survive long, and the disease may disappear during the honey-flow period. Serious outbreaks are not common, and usually no control action is necessary. If control is needed, then the colony must be requeened.

Honey bees are susceptible to many of the chemicals used for agricultural spraying of other insects and pests. Many pesticides are known to be toxic to bees. Because the bees forage up to several miles from the hive, they may fly into areas actively being sprayed by farmers or they may collect pollen from 'contaminated' flowers.

Pesticide losses may be relatively easy to identify (large and sudden numbers of dead bees in front of the hive) or quite difficult, especially if the loss results from a gradual accumulation of pesticide brought in by the foraging bees. Quick acting pesticides may deprive the hive of its foragers, dropping them in the field before they can return home.

Insecticides that are toxic to bees have label directions that protect the bees from poisoning as they forage. To comply with the label, applicators must know where and when bees forage in the application area, and the length of residual activity of the pesticide.

Some pesticide authorities recommend, and some jurisdictions require, that notice of spraying be sent to all known beekeepers in the area so that they can seal the entrances to their hives and keep the bees inside until the pesticide has had a chance to disperse.

Not yet present in the UK.

The Small hive beetle (SHB), Aethina tumida, is an invasive species originating from Africa which has proved to be a serious pest of honeybee hives in the USA and Australia. The SHB has been made notifiable within the European Community (Commission Decision 2003/881/EC)

Colony Collapse Disorder (or CCD) is a little-understood phenomenon in which worker bees from a beehive or colony abruptly disappear. CCD was originally found in Western honey bee colonies in North America in late 2006.

European beekeepers observed a similar phenomenon. Possible cases of CCD have also been reported in Taiwan since April 2007.

The cause (or causes) of the syndrome is not yet well understood. Some claim that the disappearances have not been reported from organic beekeepers, suggesting to some that beekeeping practices can be a primary factor.